Global Markets are heading north to new highs despite problems in economy, increase of debt and social protests on lockdowns, vaccines and covid -19 implications.

Getting on to the property ladder has not become easier for first-time buyers as house prices continue to rise across the EU. But which Member States saw the biggest hike, and which countries are the ‘laggards’ in terms of price growth? We bring you up to speed with the latest data Eurostat published yesterday.

​In the third quarter of 2019, house prices rose by 4.1% compared to the same period of the previous year in both the EU and the euro area. Interestingly, properties became more expensive in all Member States, with annual growth rates ranging from 0.4% to 13.5%. There were four countries – Latvia, Slovakia, Luxembourg and Portugal –, where prices grew by more than 10 percent. At the other end, property prices saw but a marginal increase in Italy, and rose moderately in Finland and the United Kingdom.

Compared to the second quarter of 2019, prices rose by 1.5% in the EU overall, but there were a handful of Member States – Cyprus, Hungary, Denmark, Italy and Finland –, where they fell by various degrees.

House prices and rents in the EU have followed very different paths since the financial crisis. While rents increased steadily between 2007 and the third quarter of 2019, house prices have fluctuated significantly.

After an initial sharp decline following the crisis, house prices remained more or less stable between 2009 and 2014. Then there was a rapid rise in early 2015, and since then house prices have increased at a much faster pace than rents.

For rents, the pattern was different with increases in all Member States, except Greece and Cyprus. The countries where rents rose at the highest rate were Lithuania (+101.1%), Czechia (+78.6%) and Hungary (+67.8%).

Called The House Price Index, Eurostat’s statistics measure the price changes of all residential properties, both new-build homes and existing ones. Greece is missing from some of the reports as the EU’s statistical office did not have the latest data for the country. 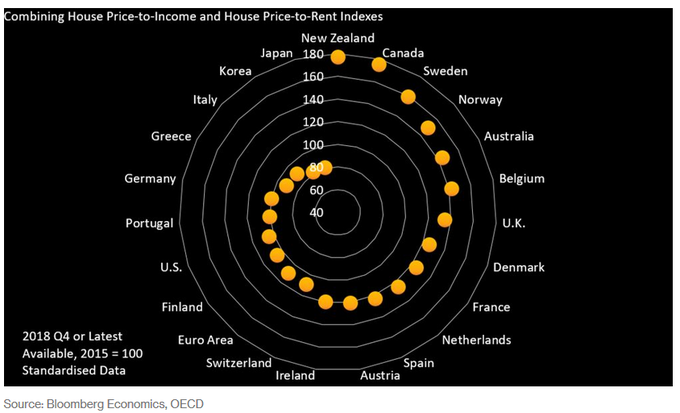 Markets are heading north while ECB is planning a new QE program, sending bond prices in Eurozone higher. Sentiment is boolish while US economy heading for a new consecutive record of GDP growth with unemployment at3.6 – 3.8% and payrolls better than expected for June. However there are some fear factors in Global Economy and a couple of them in US markets that should be taken into account from Investors and Analysts.